Last night I headed over to Hebden Bridge for edition number 23 of the Spoken Word Shindig organised by the inimitable Winston Plowes. Nelson’s Wine Bar was crowded from the start and provided a terrific audience who thanks to Winston’s expertly set up PA could hear every word and every pause.

Winston opened the night with an announcement about a future evening in September which will aim to be inclusive for people with hearing impairments and his announcement was given simultaneously in British Sign Language (BSL) by his daughter Maisie. On the night Michael Wilson will be performing and he is renowned not only for his excellent poetry but also for performing his work verbally and using BSL.

Great performances followed from Victoria Gatehouse supporting main guest Noel Whittall before the open mic with a full complement of 14 poets with some really outstanding work not least two really serious and thought provoking sets from Steven Anderson (now known to Winston as “Mr Shindig) and “H”. We were entertained, provoked and perhaps occasionally bewildered and even had guitar accompaniment from one performer; the applause and cheers told the story of a great night.

When I came up to perform at number 13 I had intended to do my anti fox hunting poem, but moved by others poems I chose to do “Not like the rest” a true and sad tale about mental illness, inadequate services and suicide – you can read it here. 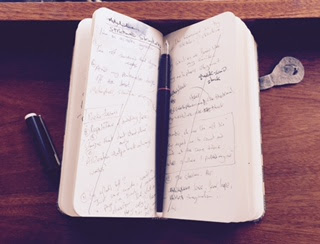 First though I decided to read a brand new poem “Strictured Structures” which had started the evening as some ideas and notes in my notebook shown above complete with smudging from condensation dripping from my glass as I wrote. Its about the essence of poetry, mine in particular, and apart from the opening line “I’m an acrostic agnostic” it isn’t available on-line.

Overall another great Shindig night in Hebden that proves that Winston and Nelson’s are doing something right!