Two groups of cyclists, a group,of walkers and lots of people to make up an audience enjoyed the special celebration at Healey Dell on 5th October 2013.

How many other poetry events have 10 attendees arriving by bicycle? 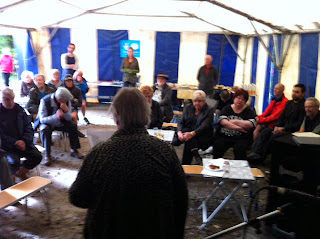 The event held in the Songsmith Solar Marquee saw live music and performances by 13 poets to celebrate the completion of a project which has seen a total of 40 poems installed on the Connect2 network throughout the borough of Rochdale. Enormous thanks to everyone who attended and to all the performers who were;

Thanks also to Andy Wiggins who came on the bike ride and wrote a short piece which I, as compere, had the privilege of reading on his behalf.

The event was organised by Cartwheel Arts and the Connect2Poetry project has been a collaboration between, Catwheel Arts, Rochdale Libraries Maskew Collection and CTC.